Maro is a quiet little village just outside Nerja on the old N-340 coast road heading east. Its greatest claim to fame is probably Las Cuevas de Nerja (The Caves of Nerja), which are located just to the north of the village. The village itself is characterised by narrow streets and alleys, whitewashed houses and great views out to sea or across the bay to Nerja.

There are actually two different start points for our routes from Maro. Firstly there is the car park at the west end of the village, from where our routes generally heading eastwards begin. Then there are the routes that head up into the hills and mountains to the north, which are best begun just outside the entrance to The Caves.

As described in the Walks Around Nerja section, you can walk to the Caves start point from Nerja itself, if you want to extend your walk, and indeed you can also walk to the Maro carpark from Nerja, with the same objective in mind.

We begin with those routes that commence from The Caves:

This walk heads due north from the entrance to the Caves, passing the El Pinarillo picnic area, and then on to the Fuente (Fountain) del Esparto. As described here it is a there-and-back walk, but this is no down side in an area as beautiful as this, with spectacular views.. Other versions allow a return route on much more difficult terrain, and it is also possible to continue on over the top down to Nerja itself, or even across to Frigiliana.


Then there are those routes that begin at the Maro carpark:

As already decribed, this route is actually reported in the Walks Around Nerja section, since it would otherwise be quite short, although it can of course be undertaken from Maro instead.

This walk heads north from the east of Maro, mainly using old mule tracks, ascending the Rio de Miel valley, before doubling back again down the river gorge. It can be pretty rocky underfoot – mule tracks and dry river beds do tend to be! – and could be a bit difficult to follow, but its original authors (or somebody else!) have added yellow paint splodges, and arrows, in addition to constructing stone cairns at key junctions. 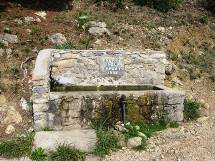 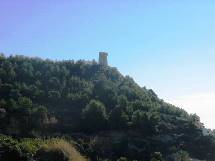 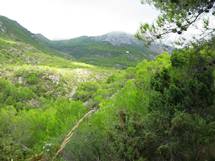