Torrox Costa is quite a pleasant sea-front area, easily reached by car or bus from Nerja. Comprising, as it does, an attractive coastal strip, in contrast to many other similarly located townships, it is particularly popular with holidaymakers who flock here during the summer, with a good choice of hotels and other accommodation available. There is also a wide range of cafes and restaurants along the sea front. It is also the site of the remains of a Roman necropolis and villa located immediately west of the lighthouse. The Lighthouse (or Faro) is itself an attractive edifice.

Elma Thompson has created a huge number of walks from this location, which, whilst not necessarily heading up into the wildness of the Sierras, nevertheless provide some interesting walking.

It is, in principle, possible to walk to Torrox Costa from Nerja (hence extending the duration of your walk), but this is not really recommended, since the route is quite busy with traffic and largely lacking in pavements or side tracks.

It cannot be claimed that this is one of the most exotic walks in the area, but it does take you through a good example of the rural areas that can be found very close to even major towns, with a number of interesting points along the way, and ending up with a stroll along Torrox Costa’s excellent sea front, culminating with a look at its lighthouse. Part of its route incorporates the old road to Velez Malaga (hence El Camino Viejo).

One of our walks from Nerja itself takes you up to the summit of the ridge in between Torrox and Nerja at its lowest point - El Arroyo del Puerto. This current walk, starting from the far side of this ridge, at Torrox Costa, takes you over the ridge at practically the highest point! A much tougher climb, but worth it for its great views. When it descends back down to the coast you can either return to Torrox Costa, or head back into Nerja. 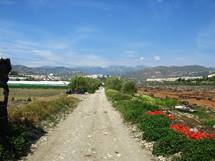