This walk, which is almost entirely based on Elma Thompson’s TC/07 walk, starts off from the junction of the Avenida del Faro (the road leading down to the lighthouse) and the main Nerja-Torrox Costa road, just before the main roundabout at the entrance to Torrox Costa, coming from the direction of Nerja. It cannot be claimed that this is one of the most exotic walks in the area, but it does take you through a good example of the rural areas that can be found very close to even major towns, with a number of interesting points along the way, and ending up with a stroll along Torrox Costa’s excellent sea front. Part of its route incorporates the old road to Velez Malaga, which antedated the current N340 route (hence its name – El Camino Viejo). The route is almost entirely flat.

The map below shows the route in its entirety, with km markers inset. You can also link to the online version of this map, located on the MapMyWalk website, with the ability to zoom in onto much finer details and so on, as described in our introduction. The link details are given above.

Thus from the top corner of the Avenida del Faro cross over the main Torrox-Nerja road and take the road almost straight ahead, heading inland to the right of the building containing the El Conejito restaurant and an ‘Administration de Fincas’ office, below left. This takes you up a dirt track, named El Carril de Gofre (which, strangely, translates as ‘Waffle Lane’). 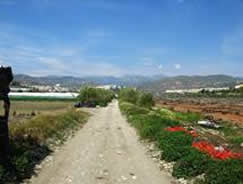 Just head on down this track until it comes out at a roundabout on the main Torrox road (with a garden centre on the right). Turn left at the roundabout effectively taking the first exit, heading back in the direction of the coast.  Cross over to the other side of the road, when it is safe to do so, and in about 200 metres turn right just before a bus shelter up a tarmac road signposted ‘Monte Alegre Club de Tenis’. You will then walk through a small urbanisation called ‘Amberes’, and when you come to a cross roads with a small circular water tank on its far side, turn right here.

Then keep to the main road, rather than taking the slip road up to a number of villas, and at a further junction turn left onto a road labelled ‘Camino de Servicio’. In a few minutes you will see the entrance to the Monte Alegre Tennis Club on your right. The road then continues downhill until, at the top of a subsequent small rise, you will see a depósito (or water tank) on your left – Los Llanos – that somewhat resembles a traditional English seaside bandstand, being rather ornately constructed. Continue on down the hill keeping to the main road, passing a row of industrial buildings on your right, eventually coming out at a fruit warehouse (the Corrida de Frutas) on the right hand side, at a T-junction, where you should turn left. Continue on down until you reach the N340 once more, at a roundabout, where you want to carry on straight ahead on a road that then takes you down to the promenade. From here we will walk back to our starting point, along the sea front. Along the way there are numerous bars and restaurants that you might like to sample. 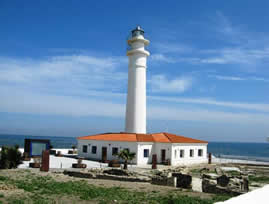 On reaching the end you can view the Torrox Costa lighthouse (Faro) from close to. Built in 1864, the lighthouse has a height of 39 m above the sea and 26 m above the ground. It was built using one of the towers of the ancient Castle which was destroyed by Napoleon´s troops in the early nineteenth century, and in its walls you can see remains of a Roman villa with numerous mosaics. There are also Roman ruins to be seen nearby.

Continue on past its main entrance to, on the side away from the beach, and down into a car park. Turn left here, paralleling a dry river bed, until you reach the main Nerja-Torrox Costa Road. Here climb up onto the pavement level, and turn left towards Torrox Costa until you get back to your starting point.