The ‘Torre de Maro’ is one of a series of 16th Century watch towers set in prominent locations on cliff tops along the coast in order to provide warnings, historically, of raids from North Africa. A very lucid history of these coastal towers is given by Tony Allen in a 2008 article in Soltalk.

The route that we describe here starts, as usual, at El Capistrano, and amounts to an 11 km round trip, incorporating a number of very interesting diversions along the way. However you can always drive to Maro instead, and simply walk from here (whereupon it becomes shortened to 5.6 km). At the end of the accompanying PDF we also indicate how you can drive to the nearest point to the Tower and walk up from there, if all you want to do is to visit the Tower itself.

The walk itself is a little bit complex to explain in the restricted context of a webpage, although a very full description is given in our PDF version of it.

From the entrance to El Capistrano Village, take the road off to the right – Via Romana – past the pool complex on your left and heading on down until, just after passing Casa La Kinta on your left, you reach the end of the row of houses on your right, at the point where C/ Europa turns off to the right. However keep straight on here until very shortly you reach a three-way junction, marked with a plaque saying Fuente del Baden, Fase II, Cuesta Colarado. Take the right of these three routes, onto a dirt road, and then in about 5 metres bear left alongside a white wall to your left hand side. 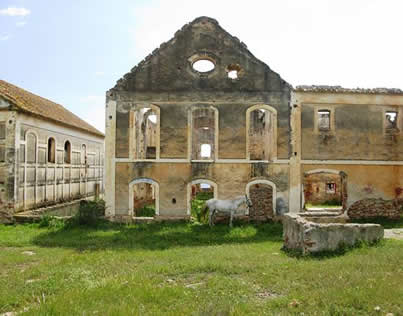 After passing a house sign on your left saying ‘N59A Bier’ you will see a fork in the track. Take the left fork here (the right one is currently fenced off anyway), until you reach a grove of pine and eucalyptus trees straight ahead. Before entering these turn right, heading uphill with a sandy cliff with pine trees on top on your left, heading up between a pylon on the left and a phone mast on the right. This track is actually comprised of large rough cobbles and is thought by some to be the remains of a Roman Road. At the top of this track you reach some broken down walls that mark the boundary of the San Joaquin Sugar Mill. The ruins of this old sugar mill are certainly worth a visit, but don’t strike across rough ground directly towards the main buildings. Instead turn left, following the boundary of the complex, ignoring the underpass to your left. From now on you are actually walking parallel to the slip road down from the motorway, on your left hand side, the track sweeping to the right, heading towards the coast road.

About 150 metres before reaching the bottom of this track, where it joins the main road close to the roundabout at the entrance to Maro, turn right towards the sugar mill itself. Here you can spend an interesting time exploring the structure that still remains, including the remains of a large circular water deposit. Once you have finished here, retrace your steps to the original track leading down to the main road, and, on emerging cross directly over the road and then go right for about 50 metres, before turning left onto the original coast road. On taking this old coast road, you will soon afterwards descend into the valley below (the Barranco de Maro), before re-ascending back to the level of the main road. In one sense this involves an additional half a kilometre in distance covered, and an unnecessary descent and climb, but from the bridge at the bottom you can view the spectacular Puente de Aguila aqueduct to the north, beyond the rather more modern viaduct carrying the N340 across the valley. The Puente de Aguila might look pretty ancient, but it was in fact built in the 19th Century to carry water to the sugar mill mentioned above.

Thus, continue on down the hill until you reach the bridge that crosses the barranco, or river bed, down below. Just before you reach the bridge you can take a track off to the left, below left, that leads to the very base of the Puente de Aquila aqueduct, (after crossing under the new road, way above). On retracing your steps, up from the valley floor, you can see the ‘Puente Barranco de Maro’ ahead, which bridge you now need to cross, heading back up to the new road, emerging just before the roundabout at the entrance to Maro itself. Turning right here takes you to the car park at the village entrance, below right, which is the basic starting point for walks from Maro itself.

From the entrance to Maro, here, walk along into the village, passing the Hogar y Centro Social de Maro, together with a further excellent cafe-restaurant on the left hand side, and then directly opposite to the Bar La Entrada (also on your left) take a right turn along the C/ Virgen de las Maravillas. The road then circles the village, giving you excellent views of the surrounding coast. As soon as you reach a wide esplanade (the Plaza Iglesia, or ‘Balcon de Maro’), cut right down a flight of steps down by the side of El Ingenio - the old sugar cane factory. Turn right at the bottom of the steps onto the road that leads quite steeply down to the beach. After about ¾ of a kilometre the road turns sharp right, looping back on itself, and, on the crown of the bend, turn left up a dirt track that becomes concreted after about 5 metres. On the map this looks as much of a road as the approach and continuation off to the right, but it is very much a subsidiary track, and easy to miss in this respect. 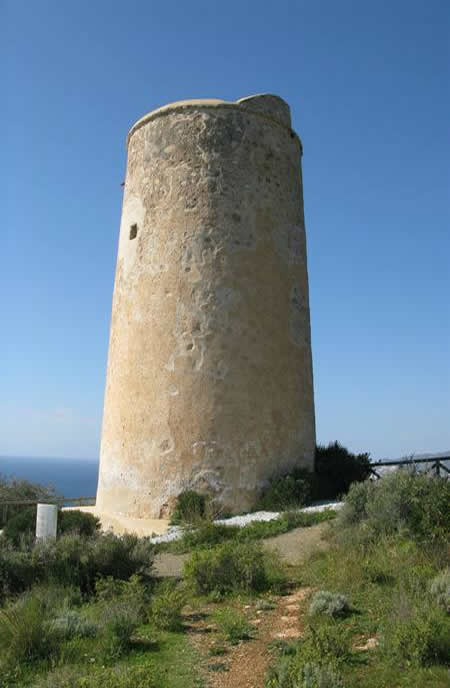 The path climbs up the hill, and at one point the Torre de Maro comes into view in the distance. The track then loops left, passing a concrete covered brick built water holder on your right, following which, in about 50 metres you reach a junction where you need to branch right along a narrow path which runs beneath a wall that consists of breeze blocks along its base. At the next junction bear left onto a narrow track, just before a small brick building, Continuing down here, keeping below the plastic ‘greenhouses’ on your left, you will pass a rather derelict-looking house on your right (with overhead cables leading to a cylindrical water tower). After descending further, the path begins to climb, reaching a ‘crossroads’ at which there is a sign reading ‘Paraje Natural’. Continue straight on here. The path continues to climb, until another path joins in from an acute angle to your right, just before a sweeping left hand bend. Take this track to the right, almost retracing your route, as the track heads in the direction of the coast. Just after passing a small clearing, rather like a layby, a steep track cuts up to your left, that will eventually bring you out at the Torre. This is a quite a rough climb, but steps have been cut into the hillside at the worst points.Then, once you reach the top, the Torre is directly in front of you.

From here you can see the Playa de Maro in the mid distance, and Nerja’s Balcon de Europa in the far distance. Looking the other way, you will see an equally dramatic view of the coast towards La Herradura.. Then looking inland you can see part of the striking mountain range that graces this stretch of the coast. On leaving the area of the tower head north along a very clear track which eventually leads down to the N340 again. On reaching the main road, just after an off-road carpark, turn left, keeping close to its left hand edge, or further to the left on a gravel track, until you reach the roundabout at the exit to Maro. From here take the direct route back to the other end of the village, along the main road. At the roundabout at the far end of Maro take the road to Nerja, keeping on the main road this time.

If all that you want to do is to get to the Tower by the shortest possible route, by car, then you can effectively retrace the final stretch of the return route above, having parked at the point where the track down from the Tower reaches the main N340. This is about 1.2 Km after you pass through the roundabout at the far side of Maro, turning right just after a sign saying ‘Curvas Peligrosas’, with a speed limit of 70 km/hour. Full details of this option are given in our associated PDF.