We have personally undertaken every walk described on this website, whilst also employing one or other type of GPS device to record the route taken. The resultant route has then been uploaded onto the highly interactive MapMyWalk website, into a special SpainAway section. The link to each of these uploads is then given on each route's website page (and also in the introduction to its related PDF). A full list of these links is also given on the following page.

If you are unfamiliar with MapMyWalk then it may be useful to summarise the information that it provides. Essentially MapMyWalk creates a number of different route options, based around the Google Maps program.

The default view provided is that of the 'Street' View, as shown below:

This view depicts the general topography of the route, its accompanying roads and so on. Kilometre markers are incorporated, and the map is of course very zoomable. This is accomplished by clicking on the +/- symbols towards the top left of the map, (or you can zoom in simply by double-clicking on the map itself). The Zoom-out facility enables you to locate the route within the larger area around Nerja itself.

Underneath the map a chart showing the elevation all along the route can be included, as shown below:

Then, on tracking along the elevation chart in a horizontal direction, using your mouse, a green 'teardrop' symbol moves along the actual route map, allowing you to very accurately relate the route to its climbing requirements.

Other views are also made possible (by clicking on the 'Map Options' button), the main ones being the 'Open Street' view, shown below, which adds further paths, vegetation etc to the information shown,

together with a 'Satellite View', shown below, whose properties are reflected in its name,

and an associated, and very similar, 'Hybrid View', which adds named roads etc to the Satellite View, as shown below:

Of rather less utility, the 'Terrain View', shown below, gives you an idea of the hills etc that are associated with the route:

Finally there is a '3-D Flyover Video' option, accessed from the '3D' button toward the top right hand corner, which provides an extremely useful 'live' transit through the route depicted, using the Open Street View. Its success relies on the fact that, rather than just being presented with a static image, that you may or may not follow in detail, here you are taken along the route in a manner that definitely captures the attention!

A section from this is shown below (close to the 1 km waymarker).

However a word of warning: the MapMyWalk software isn't 100% perfect, and you may need to reload the whole thing if you stray too far from the start point! 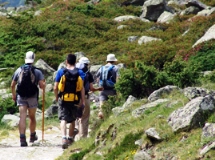 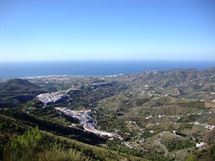 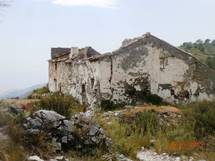 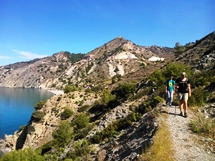 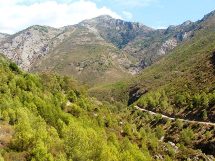 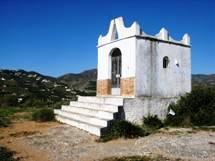 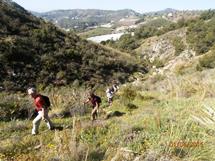 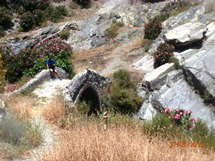 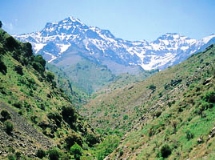 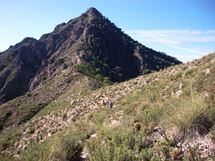 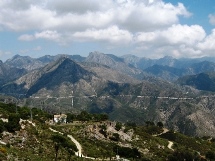 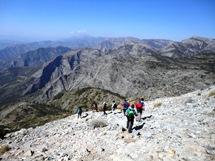 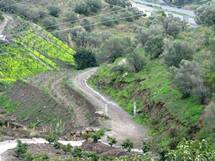