Fortunately Nerja is blessed with its own microclimate, and it never gets as unbearably hot as other parts of Spain can in the summer. Nor does it get as cold and wet as other regions can in the winter months. Nevertheless, the time to avoid, so far as walking is concerned, is June, July and August. This is the peak holiday season, meaning that most places are thronged with holidaymakers, and also it is usually too hot at this time for serious walking.

The very best time to walk is April and May, with October a close second. However any time in-between September and May can produce a great experience, with the winter months often excelling in their own right. However this is the rainy season (for what that is worth), and therefore river levels may be raised somewhat, and you need to be prepared to get your feet wet from time to time (some of the walks cross rivers or involve travel alongside or within river beds).

If you are interested in climbing high up in the mountains surrounding this area then you may also encounter snow during the winter months – certainly it is not uncommon to see snow on the peaks from down in town.

The best way to check what weather might be expected here is to log on to www.eltiempo.es.

We have tried to classify our routes in a way that will be helpful to you as a walker. To some extent the classification depends on distance or on height climbed (it is difficult to avoid climbing routes in this area), but a further factor to be considered is that of underfoot difficulty. Your underfoot route will vary from the ubiquitous concrete tracks that cover so much of Spain, to ancient mule paths, and, sometimes, fairly difficult scrambles. Certainly walking poles can be very useful here, especially on some descents.

Where possible we have tried to create circular routes, rather than simply ‘out and back’; in some cases they end at a different point to where they begin, due to the impracticality, or lack of enjoyment, in making the final connection, but you can achieve this by taking a bus back to where you started. Or, if there are several of you, with more than one car available, then you can leave one at each end of the walk, and shuttle between them at the start and finish of your walk.

Each of our website-based walks is described in sufficient detail for you to decide if this is something that you would like to do, or indeed to undertake the route itself from the information provided. However we also provide a considerably extended version - available as a free PDF Download to our own guests.

If you are already experienced walkers then much of the content here will already be quite familiar to you. But there may be some matters that are more relevant to walking in Spain.

Water: Obviously Spain is a hot country, and it is essential to remain well hydrated. A minimum of one litre of water should be taken along with you.

Sun block: Even if the sun appears to be obscured, it is very easy to get badly burnt whilst outside in Spain. Therefore apply sun block, and take along a hat.

Mobile Phone: Coverage may be patchy out in the wild, but, for safety reasons if nothing else, you should take yours along with you. You may also have walking-related Apps that will be useful, especially if you get lost.

Clothing: Take waterproofs if it is the rainy season, and warm clothing if you are heading into the heights.

Equipment: On most walks you need good walking shoes or boots, and to be prepared to get them wet on occasions. Walking sticks are also very regularly used by serious walkers in this area.

Food: Clearly you will take a packed lunch if out for more than half a day, but it is always useful to have a source of instant blood sugar replacement along with you in case you suddenly run out of energy.

Maps etc: Actually maps in Spain are not always that informative (or indeed accurate) – certainly not up to the standard of UK Ordnance Survey maps. Historically maps in Spain were produced for the benefit of the military, with the elements of secrecy (and lack of professionalism) that this implies, and even nowadays they fall far short of what you might like, with very far from all paths being marked, for example.

But if you have access to these maps then there is no harm in having one along, although internet-based versions (such as those that we specifically supply to our guests within their PDF-based route instructions) and GPS gear may well be a better option.

Safety: It is best not to walk on your own, if possible, but at least let somebody know where you are headed. The number for the emergency services is 112.

Fires: Also be very careful not to risk starting fires – in the dry season this can cause havoc in this sort of area.

In such a mountainous area, wild flowers of course abound, including gorse, broom and rosemary. Tree species include pines (in abundance), palms and yew. Many of your walks will take you alongside areas where vines, avocados, olives or almonds are cultivated, and it is difficult to avoid seeing some of the not very appealing to the eye, plastic shrouded ‘greenhouses’ that characterise the area.

If you are very lucky you may well see such rare animal species as mountain goats and ibex, in addition to herds of domestic sheep and goats, together with a number of birds of prey, including kestrels, falcons, vultures and eagles. The last wolf native to the area was reported as being killed in 1900.

The species that you need to be most aware of, though, especially in the February-March period is the pine processionary caterpillar. These make their woven nests in the branches of pine trees, but at times emerge from these and drop down to the ground, where they set off, nose to tail, following their designated leader, in lines that can reach up to several metres in length (see picture opposite).

These may look to be very delightful furry creatures, but you do need to keep well away from them, since they can eject a very nasty poison from the spines on their backs, actually firing this out at you if they are subjected to stress. This can be fatal to animals such as cats and dogs, and very harmful even to human beings. If you do get caught then you may well need an antihistamine treatment for the ensuing extreme irritation (urticaria) to your skin. 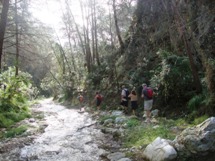 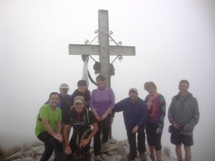 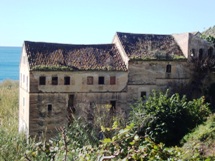 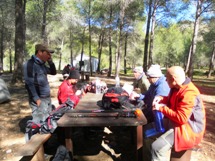 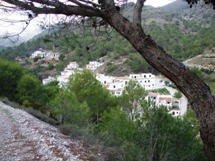 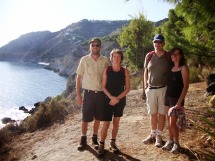 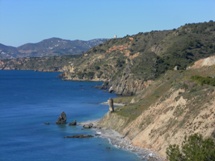 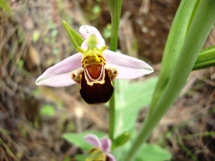