During this walk we reach the peak of Cerro del Pinto, a rounded hill to the north of Nerja, between the Higuerón and Chillar river valleys, and named after a 16th Century sea captain. Legend has it that Francisco de Pinto and his crew were caught in a terrible storm. In fear of their lives, the captain swore that if they were spared he would erect a cross in gratitude on the first land they sighted. As they approached the coast, this was the first hill revealed through the storm clouds and Pinto duly raised a simple wooden cross upon it to honour his promise. Later replaced by today's more elaborate shrine, it became a popular place of pilgrimage.

The walk is based around one of Elma Thompson’s classic Nerja walks, described in her NE/12 booklet, with some variations of our own, based on recent experience, in particular the return route, where we take you down the valley of the Rio Higueron. It is also possible to get here starting from Frigiliana (continuing on down to Nerja), but the route is very much more difficult to follow, and we do not describe it here.

The map below shows the route in its entirety, with km markers inset, together with an indication of the elevation reached during the walk. You can also link to the online version of this map, located on the MapMyRide website, with the ability to zoom in onto much finer details and so on, as described in our introduction. The link details are given above. 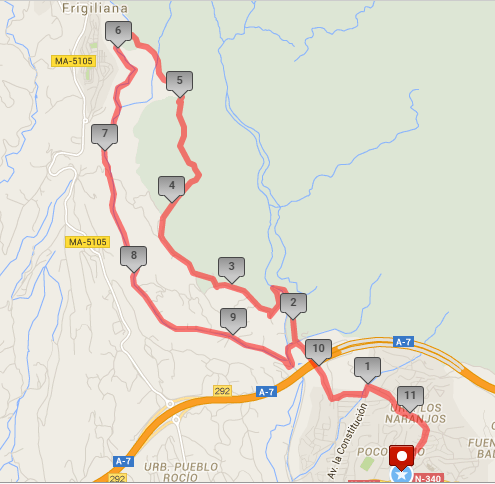 As usual we begin our walk from the entrance to El Capistrano Village, taking the left turn from here, heading up Camino de Ronda, and then turning left at the top, in the direction of the San Juan de Capistrano Urbanisation. When you reach a roundabout keep straight on here, still heading in the direction of San Juan. Keep straight on to the end of the road, though, passing the entrance to San Juan on your right, then turning left and downhill onto C/ San Francisco. Take the first road to the right (C/ Mirto, but named as Camino de Almachares on Nerja maps). After a few hundred metres keep right at a junction, heading out into the countryside, shortly reaching the road’s high point. From which there are spectacular views down into the valley (of the Rio Chillar). 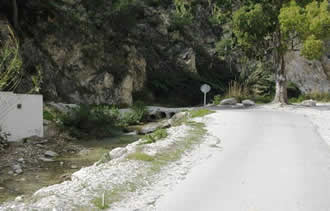 After almost reaching the valley bottom, keep right following a ‘Parking’ sign, rather than cutting down to the left (which leads to the confluence of the Rio Chillar and the Rio Higueron, which you will pass on your return journey). After reaching the bed of the river you will pass the parking spaces indicated, just on your right. [If, instead of walking from Nerja, you choose to drive to this parking point, then you will cut about 5 km from your total journey]. About 100 m past this parking area, cross left over the bed of the Chillar River by means of a concrete culvert, shown left.

Follow the (concrete) road as it climbs up the hillside, until you reach a junction at which a rough track goes off down to your left, and a concrete path goes off to your right, just before the gates of, and running alongside Villa No 61. Take this right hand road, following the sign for ‘Quinto Pino’.  In a short while the road turns left, and rejoins the previous main road at a villa named Casa Sophia. Turn right here on a concrete road to the left of Villa Los Tres Pinos.

At a further ‘Y’ junction, keep right, still following the sign to ‘Quinto Pinos’.. After a further short distance you will see a turn to the left descending to the gates of Quinto Pino itself. However immediately to your right is a narrow track heading up the hillside, marked by cairns on either side, and exhibiting a ‘Parque Natural’ sign. This track leads up to the top of the Cerro Pinto itself (although the shrine isn’t seen until you are virtually there). It is actually quite a tough climb, and an alternative route is described in our associated PDF.

There is just one point where the route isn’t a 100% clear, where the track forks left downhill for a (mercifully) brief while, at a patch of white rock underfoot, flanked by pine trees. You can also, sporadically, confirm that you are on the correct route if you spot a splodge of green paint along the way. 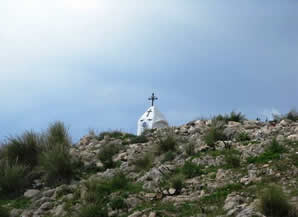 Once you reach the shrine it is well worth taking the time to enjoy the views, Looking straight ahead, for example, it is quite a surprise to find that not only are you almost level with the mountain village of Frigiliana, but considerably higher than it too. Moving on you need to take a path down the hillside, in the direction of Frigiliana. This path itself is quite steep, although less difficult than the climb up (and is in fact used by our alternative route). On reaching a clearing you will see several tracks going off. Turn left at this point for a few metres, until turning right again, then keeping to the left, down the hill, eventually heading for the river (Rio Higueron) valley way below, still looking out for green splodges to guide your way.

Eventually you will reach the river bed, where you should turn left, following its course downstream. The only real difficulty here comes when you reach a quite short waterfall. Here you can either choose to slide down its bank at the side, or take a brief detour to the right, by a pipeline, jumping across a pool at the base of the waterfall. Either way you are going to get your feet a little bit wet! Following the course of the river down there are places where you have to walk along the river bed, (there’s probably not very much water flowing), or, briefly, along tracks bordering either the right or left hand sides. The final difficulty (a minor one, unless you suffer really badly from vertigo) is a flight of concrete steps not very high above the river bed below. Sometimes there is a rope handrail on either side, but it sometimes disappears.

After a couple of kilometres walking beside the path of the river (do keep following the route of the river, ignoring any turns off), you will reach the confluence with the Rio Chillar, just before the motorway. You need to turn left now, up by the northern side of the Chillar (you can either cross it at the vehicle ford, or go a few metres downstream and cross at a concrete culvert), taking a road off to the right after a short distance, at a point where you will see both a ‘Parking’ and a ‘No Entry’ sign. After a few metres take the right hand at the junction reached, whereupon you are now back on your incoming route, and about to climb back out of the valley, turning right at the T-junction at the top.

Once you reach the summit, by a line of pylons , continue to retrace your route, turning left up to San Juan at the end of C/ Mirto, and then right onto the road skirting the bottom of the San Juan, and onto Camino de Ronda at the top end of El Capistrano Village, back to your start point.