Tragalamocha and the Rio Chillar          Return to: Walks around Nerja

This walk is based on Elma Thompson’s NE11 and NE20 routes. A real bonus feature of the walk is that it begins from about the closest point possible to El Capistrano (in the San Juan de Capistrano urbanisation just to the North) and immediately enters raw and very beautiful countryside, with some marvellous views of Nerja, its coastline, and the Sierras de Tejeda and Almijara. 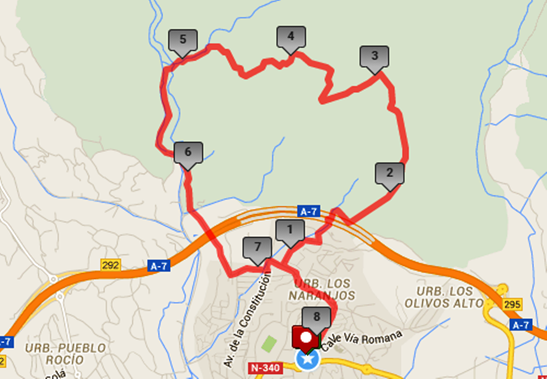 We begin by walking up from the usual start point at the entrance to El Capistrano, taking the left hand road up Camino de Ronda, right up to the top. Here you need to turn left up towards the San Juan de Capistrano urbanisation, the highest in Nerja, passing straight on by a roundabout on the way. Turn right into San Juan up Via Real. As you head up the road you will see the hills ahead that you are aiming for. Then at the T-junction ahead turn right onto Palmeras, until you reach a small shopping area on the right, turning left here onto Mandarinos. At the next fork, take the rough track immediately ahead, on the corner, just before some recycling bins. Keep to the right of the large green garden waste container and continue along the track. 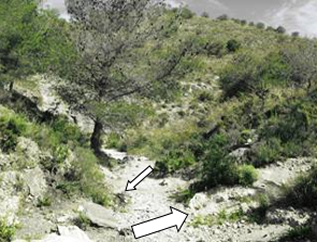 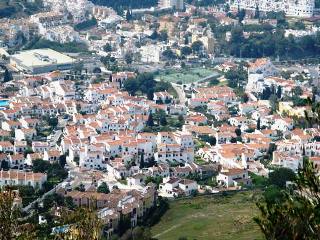 Very shortly you will pass an unusual feature – the Pet Cemetery – on your left. Continue on up the track, soon entering the Parque Natural, indicated by a green sign. There is also a stone waypoint marked MP 52 71 just by the green sign. About 70 metres after the Parque Natural sign, you will reach a fork in the track, just before the tree on the left, as shown in the picture above left. The main route, straight ahead, is signposted Rio Chillar, which is the route you can come back on, if you decide not to proceed to the Rio Chillar itself (see later). The ‘Rio Chillar’ sign itself is actually just a piece of wood perched on a rock, and hence not guaranteed to remain here for ever, and so don’t rely on seeing this. The narrower and steeper fork off to the right is not that obvious, but there is a rather faded red paint mark on a stone just opposite to this point. On the picture above left the position of this stone is marked by the small arrow, and the track you need to take off to the right is marked by the large arrow.

Gradually bearing to the right, this track climbs upwards and will then take you up to an intermediate peak to your right, from which you can get some splendid views of the town of Nerja and the motorway route out to the east from here, pictures above. From here the route to the top follows a narrow rocky path and is marked by occasional blue paint marks. It is described by Elma Thompson as taking some 20 minutes (although it took the writer, at a somewhat younger age than Elma, more than 30 minutes to get there!). The summit itself is marked by a stone cairn. Tragalamocha is actually just the lowest peak on a very long ridge that crosses the Collado de los Apretaderos. From here even more spectacular views can be obtained, including that of El Cielo, the highest peak in the area. Other views include the ruins of the old San Joaquin Sugar Mill and the El Capistrano development, from where you began your walk, picture above right.

Once you have obtained your fill of these sights you can carry on the track just past the cairn, heading further into the hills, your route being marked by further occasional blue paint marks. You will pass a further cairn, but continue on the path to its left, heading for the two large rock buttresses that can be seen in front of you. Eventually you will pass between these. When you reach the base of the first of these (the one on the right), take the path to the left of this still looking out for blue paint marks. Continue following the blue paint marks towards the second summit, where the path leads just to the left of the peak and there is a steep scramble up. Once you’ve got up there, the path bears to the right and you will find that you are at the top of the second peak, looking towards the third and final peak. Then follow a row of cairns, and paint marks to the next summit, which brings you out onto a high ridge from where you can see Frigiliana in the distance. 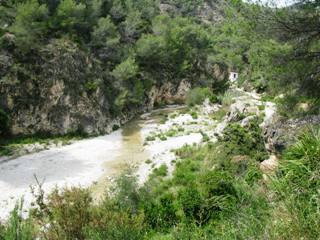 Then turn left on the rocky ridge, your aiming point being the motorway twin tunnels in the far distance. There are no longer any blue dots to a mark the route, but the track is clear, although rocky in places. It runs across the top of the ridge and then descends in a winding path through pine trees. After you have walked about 600m from the top of the ridge you will come out at the large cairn shown above left. From here you can either take a left hand turn, if you choose to take the short return route, returning directly to San Juan (saving about 2 ½ km in distance) or turn right, if continuing on to the Rio Chillar. If you do turn right here, the subsequent gradually steepening rock-strewn descent through pine woods is quite hard work. The path crosses a couple of side gullies, leading uphill again briefly, before descending steeply between two ‘barrancos’ until eventually you reach the valley bottom (Barranco del Lobo) where the path makes a sharp left turn to continue along the valley floor. As you continue along the valley you will need to negotiate a few fairly high rock steps. You are now walking down the Barranco del Tranco, which eventually leads to a fairly flat and recognisable path, with caves on either side. Keep left now along the path by the cliffs, passing more caves, until you reach an acequia (or water channel). Keep right here, continuing on down, and you will soon see the bed of the Rio Chillar down below, picture above right. You now need to head for a transformer pylon and hut, reaching the actual river bed by its side. Follow the course of the river downstream (depending on the time of year you may have to get your feet wet slightly) until you reach a drivable section of rough road.

Continue along this concrete road, heading back in the direction of the coast. At one point there is a fork in the road, where you should bear left continuing upwards, ignoring a further turn off to the right (downhill) a little further up. After passing under the motorway you will head on to the top of the ridge, where you then begin to enter a built-up area. Continuing straight on through this area you will come to a T-junction with the Avenida de la Constitución, where you should turn left. After a short while there is a right turn, which now takes you along by the bottom of the San Juan de Capistrano urbanisation. From here you can now retrace your original route back into El Capistrano.