This walk combines two of Elma Thompson’s classic Nerja walks, described in her NE/01 and NE/16 booklets, with some variations of our own, based on recent experience.The walk again takes you out west of Nerja, parallel to the coast road, although largely running alongside the motorway that heads out from Nerja towards Malaga. About 5 km out of Nerja the motorway runs through the classic ‘twin tunnels’, the actual Puerto being the high point on the ridge above.  The views from here are quite dramatic, and the route itself is fairly challenging and provides a satisfying expedition.

Starting, as usual, from the main entrance to El Capistrano Village, walk down the hill past the Supersol supermarket on your right until you reach the roundabout below. Continue a short distance down the main road, and then take the first turn to the right onto C/ Picasso. Follow this road as it quite quickly turns into a country road, descending steeply down to the bed of the Rio Chillar, below. We have actually researched an alternative route to that used originally, which takes you through much more pleasant countryside, making use of a little-known, although quite ancient pathway. Thus, on reaching the Rio Chillar, just after 1 km, you will see immediately opposite to you, across the river bed, a pathway leading up the hillside opposite). Normally the river is shallow enough to just stride through here (especially if you are wearing walking boots), but if the flow is slightly too high then you can go about ten metres downstream, and simply step across the river at a narrow gap opposite to a small boulder.

After crossing over here, take the concrete road route up the hill to the left, passing a red coloured house (No 12 Poniente). On reaching the top, bear right, still on the concrete road, for a further 20 metres, but where the main road turns right, go straight on along a rough track, keeping to the right of a waymarker indicating the GP249 Senda de Malaga route. The track then narrows as it passes through a tree plantation, before dropping down into the bottom of the valley, and then going up the other side, eventually becoming a rough concrete path. Turn right at the top, and continue through the urbanisation ‘El Cielo Exotica’, keeping straight on uphill. 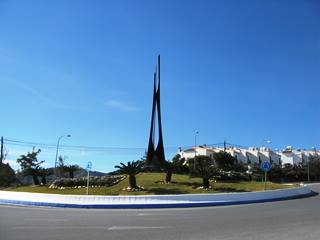 ontinue on until you reach the main Nerja-Frigiliana road with a roundabout, plus spire structure, at the top. Cross straight over at this roundabout, following the sign for Urbanisation Pueblo Rocio, on C/ La Colá. Continue on down the hill, ignoring turns off to the right, including that signposted to Pueblo Rocio itself, and, after cresting the next rise, continue on to a cross roads, at which you should turn right, following signs for, amongst others ‘SeaCrest’ and ‘Villa La Imoroga’.

Continue along this road until you reach the motorway, overhead, at the 3 km point. Although it is possible to walk parallel to the motorway on either side, at least to the point where you cross the Rio Seco (see below) it is the northern side that gives the better views, and therefore you should take the underpass underneath the motorway. Almost immediately the road forks, and here you should bear left, onto a fairly rough road, passing the aforementioned Seacrest Kennels. As you continue downhill and west along this road, paralleling the motorway, you will see the iconic ‘twin tunnels’ ahead of you, taking the motorway underneath the ridge, the gap in which that we are heading for being known as the Puerto, and which can be seenfrom here as the lowest – saddle – point of the ridge, just to the right of the tunnels. The next point to be navigated comes as you dip down underneath the motorway once more, as you reach the riverbed of the Rio Seco II, just after 4 km. Its name means ‘Dry River’, and there may well be little or no water flowing along its bed, but in any event if you turn left underneath the motorway and then follow the road to the right, which will take you over the river on a substantial bridge. You should then turn right, upriver, where a brief left turn (signposted Cortijo de Carmen), followed by a right turn (signposted to La Residencia), which will take you back underneath the motorway to its north side, and you can continue along this road heading towards the tunnels. Before you reach the entrance to the tunnels you will see a turn off to the right, signposted La Residencia, below a blue ‘El Pino Camping’ sign up on the hillside, just at 5 km.

The track now winds up the hill, passing Villa Dorada on the right, Cortijo Puerta Mar on the left, and Hacienda Antrobus on the right. After passing the entrance to La Residencia itself, and then that of El Palmeral, the road forks just before the top of the rise. Take the left turn here – onto a dirt track – passing to the left of an electricity pylon. The track sweeps right and then gently downhill until you are approximately level with the tunnel entrance. After passing a couple of round white water tanks, below you to your left, and just before 8 km, there is a right turn on quite a wide, albeit rough, track, up to the top of the ridge, (the main path actually swinging round to the left). 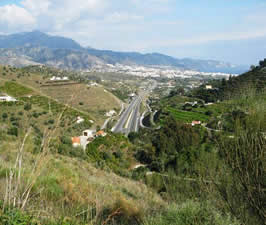 From here you can see the motorway heading out in the Nerja direction from the tunnel below you. The view from up here back in the direction of Nerja is quite spectacular, and makes the whole climb very worthwhile. However you should then carry on over the top of the ridge a short way, until you see the motorway emerging from Tunel Torrox at its western portal.

Some sources decry making this final effort, since the views over to the Torrox side hardly bear comparison with those towards Nerja. However we feel that if you are going to make all this effort to reach the summit of such a spectacular ridge, then there is at least a psychological imperative to continue up to the very top to see the other side in this way. Returning down to the main track and turn right. Follow the track along, ignoring gated driveways, until you come alongside a large villa with a yellow balustrade. At this point the road forks, and you need to turn left here onto a concrete road, heading downhill with the motorway in sight ahead (ignoring the Carrill Privado sign which - probably – applies only to motor vehicles).  Continue down until you are level with the motorway, at which point you will see an underpass to your left. However you should bear right here, continuing on downwards, on a pretty rough track, ignoring a junction off to the right some way down, and which will bring you out, on a much improved surface, back at the Rio Seco II lower down than previously. Turn right here, alongside the river bed, whereupon there are several choices. One is to turn left shortly onto the Camino de Enmedio, as described in our ‘Ermita de San Isidro' walk, or to follow the river until it reaches the main Nerja-Torrox Costa road and then head back into Nerja along this main road.

However what we have elected to do instead, on reaching the road, is to continue on until you reach the Playa Playazo (a – so far – unspoilt, rather than built-up, beach, much favoured by the locals, and to head back towards town this way. A particular feature of this route are the largely uninterrupted views of the magnificent range of mountains that form such a dramatic backdrop to Nerja. Thus, on encountering the main road cross over onto the pavement, and turn left here, until, after passing six metal lamp posts you reach the entrance to a large carpark on your right, immediately opposite to the ‘Bar Venta San Miguel’ on your left across the road. Turn right down into the car park, and continue on to its end by the beach. When you reach the beach, at 13 km, turn left and walk along it all the way towards town. There are several bars and cafes along the way, including one of Nerja’s best paella restaurants, Chiringuito Mauri. At the end of this stretch of beach you will reach the point at which the (probably dry) Rio Chillar meets the sea.

Here you can either go straight on, reaching the Torrecilla Beach, close to the town centre (and make your way on from here), or turn left shortly getting up onto a raised walkway alongside the Chillar. At one point you will come to a crossroads, but continue onwards on a similar section of walkway, until reaching a zig-zag pathway up to the main road. Here turn right, shortly reaching the main Supersol supermarket on your right, and continue up through the town back to El Capistrano