Torrox To Torrox Costa and Return        Return to: Walks around Torrox

This walk begins in the village of Torrox. From Nerja take the A-7 motorway out of town in the direction of Malaga, taking the turn off to Competa and Torrox. After winding up the hillside you will reach a roundabout, from which the road to Competa leads off to the left, and that to Torrox to the right. As you descend into the village you will see a carpark immediately on your right, which is the start point for this walk.

The map below shows the route in its entirety, with km markers inset. You can also link to the online version of this map, located on the MapMyWalk website, with the ability to zoom in onto much finer details and so on, as described in our introduction. The link details are given above. 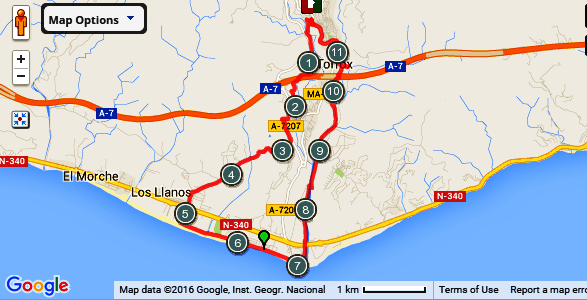 We haven’t included an ‘Elevation’ chart here, since the route simply descends from 140 m above sea level, down to sea level, and then back again, fairly uniformly.

Leave the carpark at its bottom entrance (or rather exit) heading down the hill in the direction of the village centre, until in about 50 metres you reach a break in the railings at which you should turn sharp right, effectively doubling back on yourself.  Follow the road down, and then after about 150 metres turn left, again virtually doubling back on yourself, heading in the direction of what looks like the remains of an old mosque-like building. Veer right at the junction as you pass this building. Continue down along this road. At the bottom of the hill you will see an overhead bridge in front of you, located just after a shallow stream crosses your route. After crossing the stream turn left just before this bridge onto a rough track. Follow this track, keeping right at a Y-junction that you encounter fairly soon, more or less paralleling the main road to your right. Keep straight on here, avoiding all turnings off to the left, climbing up a slope, until joining a concrete road with a sign for ‘El Vaquilla Building Materials’ seen ahead. However turn left immediately on reaching this road, heading down to the El Vaquilla builders yard itself. Turn left by its front gate and continue on down this track.

At the next junction keep right, keeping to the same level. Then keep straight on, passing a Cortijo on your right, just after the road briefly turns into a dirt track (and ignoring the track that takes off to the left), until you see the motorway ahead of you to your left. At the bottom of this track the road passes through an underpass which tales you left, underneath the motorway. On exiting the tunnel immediately turn right, and then continue on until you see a plastic greenhouse ahead, with a sign in front containing the word ‘Malaga’ in red, where you have to turn left. Continue along this track, until you reach a junction with ‘Villa Alicia’ on its corner, where you should again turn left at a rather tatty plastic greenhouse with an ‘Ayuntamiento de Torrox’ sign in front of it. Continue on down this road, downhill, until, following a swing to the left, and a short stretch uphill,  you reach a further underpass, this time to your right. Go through this underpass and then turn left at the first junction ahead (again with an Ayuntamiento sign at it).

This track then leads down on to the main road, where you should keep to the minor road paralleling it to the right.. Continue along this minor road, heading for the coast, always keeping to the good road surface, until at the top of a climb you come to a T-junction, where you should take the right fork with a signpost (attached to the pylon ahead) directing you to ‘Hotel Cortijo Amaya’. Continue along this road, until, at the top of a subsequent small rise, you will see a depósito (or water tank) on your left – Los Llanos – that somewhat resembles a traditional English seaside bandstand, being rather ornately constructed. Continue on through a light industrial area, eventually coming out at a fruit warehouse (the Corrida de Frutas) on your right hand side, at a T-junction, where you should turn left. Follow the road down to a roundabout on the main N340 coast road. Cross over the roundabout and head on until you reach the beach at just over 5 km. Here you should turn left along the promenade, (there are plenty of cafes and restaurants along here, should you wish to take a break) following it right to the end with the lighthouse (or Faro) straight ahead.

Halfway up some steps, just past the restaurant La Rompiente, is a path leading off to the right that skirts the lighthouse on its seaward side. A cannon facing out to sea is passed early on. At its far end the track reaches a cross roads, at the end of this stretch of path, which concludes with about half a dozen steps (with the main entrance to the Faro off to your left). Turn right here, down onto a gravel track running alongside the river, where you should turn left. Continue along this track by the river, crossing under the N340 coast road (mind your head here), where, as shown by a red and white banded post, you are actually joining one of the Gran Senda de Malaga walking routes. After passing under the coast road at this point continue straight on, with the river (the Rio Torrox) to your right, very much heading directly inland. After a while you will see a concrete path sweeping in from your left (and ahead).. Turn right here, using this path to cross the river (not usually very wet), and then immediately turn left to continue heading north, but on the other side of the river. You are actually still following the Gran Senda route, as shown by the marked post (the directions that do not follow this route are marked by a cross, rather than with parallel stripes).

Eventually you will cross back onto the original (left hand) side of the river, but only when you eventually reach the point where the current track actually comes to an end, at about 9 ¾ km, just about level with a tall brick tower over to your left, and at a distance (part of Torrox’s old sugar factory), passing a further ‘Gran Senda de Malaga route post a short while later (showing you that you are on the right course). Continue straight along this track, passing (but ignoring) a concrete bridge over the river to your right.. On reaching a Y-junction, in front of a large plastic greenhouse, take the concrete path up to your left. Continue along this track until you reach the two overhead motorway flyovers, and cross under these. Shortly thereafter you will see a junction ahead, just below the main road above, with a sign indicating a route to Nerja off to the right. At this point, just over 10 ½ km into your walk, you can take a brief (optional) diversion, by taking this route sharp off to the right, downhill, to view an ancient bridge (said by some to be Roman in origin). 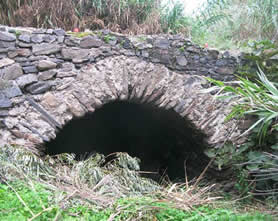 The route down is quite steep, although aided by a number of steps built into the hillside, and comes out at, and then crosses the River Torrox. At Halloween this location serves as a meeting point for enthusiasts, illuminated by lanterns and small ‘tea’ lights. The bridge itself is certainly quite old, as can be seen from the picture to the left. Originally it gave access to the coast, and is mentioned in the works of Cristobal Conde Medina and Pascual Madoz. The reason for this diversion being signposted ‘Nerja’ is that from the far side of the bridge you can take a very rural route – over the Arroyo del Puerto, as described in another walk, from Nerja itself – and which is marked by the ubiquitous ‘Gran Senda de Malaga' posts. However this was intended as an optional diversion only, and on retracing your steps back to the original signposted junction, you should continue up the raised concrete path up to the main road, turning right towards the centre of the village. After passing the police station on your left you will reach a junction marked by an Asian store straight ahead, at which point the main road swings around to the left. Follow this road as it winds round, up the hill, ignoring all turn offs, until you get back to the car park from where the walk began.