We recommend this as a guided walk, partly because of the depth that can be added to it by being accompanied by somebody who knows the complex and fascinating history of Acebuchal, in addition to knowing the people involved there, and therefore, for example, being able to ensure that you are booked in for lunch OK in Acebuchal itself.

N.B. The map below is intended merely to give a flavour of where the walk is located, and is not to scale. For example, it might look as though, instead of treating this as an out-and-back walk, you could plan to return via Cómpeta and Torrox instead. However if you did attempt this it might be advisable to take along a tent and sleeping bag!

The route that your guide takes may not exactly follow what is shown here, but you can be assured that it will be a great walk amongst marvellous countryside. 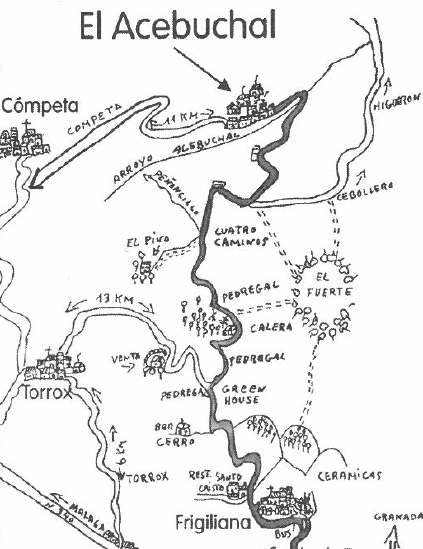 The name ‘Acebuchal’ originates from the Arabic word ‘acebuche’, meaning olive bush. The village’s existence is generally dated back to the 17th Century, but it was probably inhabited long before then. For many years it existed as a stopover place for passing traders, being situated on a traditional muleteers’ route between Granada and Malaga.

However, along with many other rural communities, Acebuchal became inextricably caught up in the conflict between the Franco regime and the surviving Republican guerrillas, following Spain’s catastrophic Civil War which took place in the late 1930s. Following years of strife, in the summer of 1948 the story runs that the authorities ordered the residents of Acebuchal (some 200 people) to abandon their homes, on the grounds that the village was suspected of providing refuge and food to the guerrillas, although in truth they were probably caught up in the middle between the two warring factions. There are variations on this description as to what occurred, and even today the situation is shrouded in a degree of mystery. Whatever, the abandoned hamlet soon fell into disrepair and eventually into ruins, becoming known locally as “The Lost Village” or “Pueblo el Fantasmas” – The Village of Ghosts.

Fifty years then went by, until in 1998, Antonio García Sánchez – known as ‘El Zumbo’ (below) – son of one of the original villagers, returned with his wife and family to restore a couple of houses in the village. Once these were completed, they rebuilt a further five houses and then, as rural tourism in the area began to increase, they built the tavern that now serves as the centre point of the village. Other former residents then turned their attention back to the idea of restoring their old family homes, so that today, all 36 houses, the chapel, tavern and cobblestone streets have all been returned to how they once were. 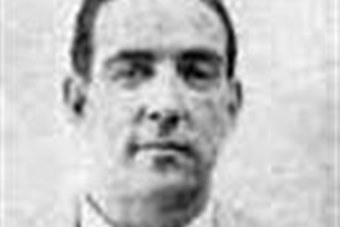 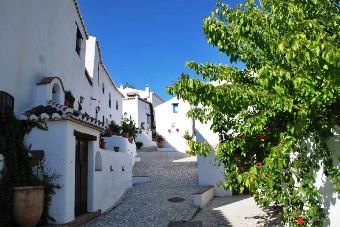 Originally the reconstruction was all done by hand - there wasn’t even electricity or water until 2003. Now Antonio’s family (including his son, also named Antonio) run the village restaurant, where the food can only be described as wonderful - most of the produce is of course grown locally and the house speciality is game, with wild boar, rabbit, venison, duck and lamb.

The first part of the route itself is typified by a walk of alternating stretches of moderate hills and flat stretches along the quiet, paved country lanes and backroads of the pretty Frigiliana countryside. As you begin the second stage of our walk, the landscape changes to gently undulating terrain and well-maintained forest trails. This part of the walk takes you through the Natural Park and the predominant vegetation of pine forest. The hillsides here are covered in wild aromatic plants like rosemary, thyme, oregano, lemon thyme, sage and lavender, among others. 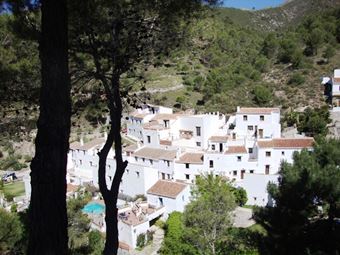 At this point of the walk also, there are lovely vistas from the highest point of the itinerary, where one has lovely panoramic views of the surrounding countryside and the many lowland valleys that stretch down from the high sierra towards the coast. Continuing along the route, you enter into the pretty Acebuchal mountain valley. The road changes to an unpaved but well-maintained and wide forest trail, gently dipping and weaving its way through the pine forest along the slopes of El Fuerte (another walking route that you can take from Frigiliana, but rather steeper!) as you make your approach to the hamlet of El Acebuchal.